Seeing Milan with the Kids 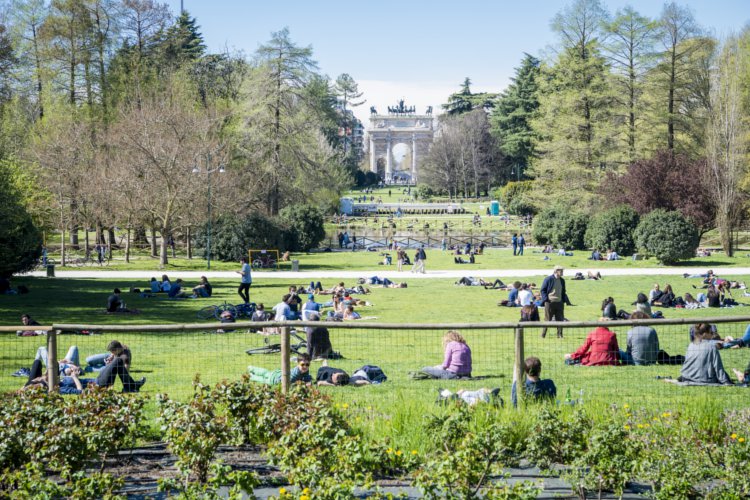 B.Spoke: It has been a while since I spoke to you both last, can you tell me what you’ve been up to?

Linda: Well most recently we took our twin granddaughters to Milan for their 11th birthday, which while I wasn’t sure how it was going to work out from the outset, turned out to be a wonderful vacation.

Steve:Yeah, I was wondering why those girls chose Milan? I mean it is a great location for a holiday and we’ve been there a couple of times before, but it’s a center of commerce mostly, with a lot of really big churches and old buildings. I wouldn’t have thought that would hold much interest to a couple of pre-teens.

Linda: Well I don’t think they were interested. Remember we walked past the Duomo and we pointed it out to the girls and their response was “Yeah we already know about that one!”. They are absolutely sweet girls, but their tastes are not at all sophisticated.

Steve: It’s probably the influence of that father of theirs.

Linda: Undoubtedly. So instead we ended up discovering a whole new kid-friendly side of Milan and it was utterly delightful.

B.Spoke: So what were the highlights?

Steve: Well, I can’t speak for the girls but a highlight for me was the Natural History Museum which is located in Giardini Pubblici Indro Montanelli - a huge national park. There, we saw a fantastic collection of towering dinosaur skeletons. One of which, I believe his name is “Cyrus”, and he was the first Guido to stomp around, still had intact fossilized internal organs. I gotta admit it was very cool.

Linda: Remember just across the park was the Planetarium, the girls also really liked that.

Steve: Oh yes that was remarkable. I find with Planetariums that no matter how old you get, you never stop enjoying them. Apparently, it is a direct reflection of the night sky as it was in 1930.

Linda: It was a wonderful day, wasn’t it? Also in the park are a series of permanent carnival rides and playgrounds. I don’t think we got back to our hotel that night until very late.

Steve: I thought another great location to take the kids was Parco Sempione, we spent the whole day there, remember?

Linda: Oh yes it was lovely. We arrived early in the morning and started our day at Castello Sforzesco,  a medieval castle located within the park. The girls loved it! It was totally iconic of a fairy tale castle with turrets, spires, a moat and secret passageways.

Steve: I think we were all hoping that the inside of the castle would have kept to that medieval theme, but instead it hosted an art museum and archeological exhibition, which was certainly more interesting for us than the kids. The girls instead preferred to go exploring and romp around outside the castle. There was a recreational area, where the kids could dress up as knights in armour and damsels in distress. We found them both dressed up as damsels, battling off with foam swords. Clearly, they were not concerned with their character’s authenticity, but it was quite the spectacle!

Linda: Afterwards, we had some lunch at a beautiful terrace cafeteria located in the park, then we walked over to the famous gelateria Biancolatte, where we treated the girls to an authentic Italian ice cream.

Steve: Let’s be honest we didn’t just treat the girls, If I remember correctly you had the none-too-slimming peanut butter and Nutella gelato, while I think I had a rather delicious pistachio and moccachino combination.

Steve: After lunch we then walked over to visit the Milan Civic Aquarium, which is also located in the park, but as it is underground, it was nice to escape the heat for awhile.

Linda: I loved it. It is one of the oldest aquariums in the world and it has still retained its ornate baroque style facade. The interior, though has been renovated and is very modern with domed glass ceilings. It was a beautiful place to visit and I would highly recommend it to anyone.

B.Spoke: So Steve, I'm surprised, but you still haven’t told me about what car you drove?

Linda: Wow, Steve what’s wrong with you? Is this really my husband (poke, poke).

Steve: Good point, I don’t really know how i skipped over that. This time, with the girls in tow, we went with the BMW X5 M for the extra space and legroom. It was a good choice too especially in Milan as it has all these driver assist technologies that made it a pleasure to drive through busy streets, such as automatic park assist and 360 view cameras.

Linda: Dare I agree with Steve, it was a good practical choice and an exceptionally comfortable SUV. You know it was nice seeing Milan again but this time through the eyes of a child. It gave it another dimension that was fun and more relaxed. I think we would do it again, what do you say?

Steve: Maybe, just don’t suggest it to their mother.