A Scenic Drive to Switzerland’s Most Dangerous Precipice 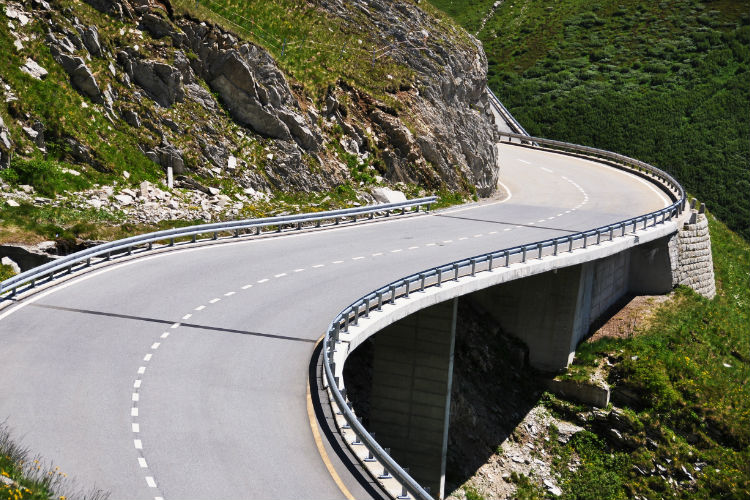 I am about to embark on one of the most exhilarating, dangerous, dare I admit, scary and yet piercingly beautiful drives of my lifetime. I am extremely excited. The drive starts on the Furka Pass in the Uri/Valais region and after 30 km or so, turns into the Gotthard Pass of Ticino. The Gotthard Pass extends over 60km of absolutely sensational mountain driving, through the most remote sections of Switzerland’s great Alpine Ranges. Ready to go? Buckle up.

The luxury car rental that I have selected is a metallic green Land Rover Discovery. In light of its colour and robust build, I name him “Shrek”. It’s the SUV that I have been wanting to drive for quite some time, and this journey feels like the perfect occasion. I need a car that is powerful and with exceptional brute force, to climb over extremely steep vertical slopes. Powered by an 3 liter turbo diesel engine, it has an 8 speed steptronic transmission that allows its driver to shift gears facilitating an optimum force delivery, one which I am keen to try out first hand.

My journey starts in the hamlet of Gletsch, the village gateway to the Furka Pass, and I head off north east towards the mountain resort of Andermatt. The road is gradually rising in altitude, which I believe reaches a pinnacle of 2,431 m above sea level. It’s a steep vertical start with hairpin turns, yet Shrek doesn’t fail to deliver, keeping an athletic pace despite the angle, Shrek comes across as quite the dare devil. The views are already sensational, on my western side, I can see the Rhone glacier, its ice cap reflecting the sun’s light. It majestically gives the sensation of being at the world’s edge.

Gradually the road smooths out, becoming more straight forward and less steep, yet the scenery is just as tenaciously wild. At a point along the serpentine of the glacier, i get out to take a breather of the fresh mountain air, eat some snacks and take a lot of photos of the glorious landscape.

This breathtaking, cold and ice-capped corner of the world has quite the fearsome reputation. Tightly hairpinned and bumped, there are many sharp and blind curves along the way. The Furka Pass was initially opened in 1867 as a strategic military route and remains today as one of the highest Alpine passes in Switzerland. The road winds its way through the mountain, at the precipice of nature, with wild exposure of unsecured stretches of road and glacier ice that is known to crash down from time to time. Perhaps, for these reasons, this pass was selected for the James Bond movie “Goldfinger” where Bond drove the Aston Martin DB5 to escape being sniped by Tilly Masterson. Let me tell you, the bullet was the least of Bond’s worries. I am taking this particular stretch of road in a distinct non-Bond type of glamourous style. With blind curves and sharp switchbacks, it’s a white-knuckle ride all the way down for me.

As I drive into Göschenen in the canton of Uri, I link onto the Gotthard Pass through the highway tunnel, which was only fairly recently completed in 1980, and is the longest vehicular tunnel in the world. However, accessibility to this wildly beautiful expanse was for centuries untouchable. The cavernous mountain district is filled with lakes such as the Lago della Piazza, that gradually turns into larger Lucendro and Lago Sella reservoir lakes. These reservoirs were impenetrable, as it was near on impossible to construct a bridge on such precarious ground. Even today you have the sense of passing through virgin land (albeit not in the summer, when the tourist hordes are traipsing through). The trail of road continues to be highly enthralling and my friendly Shrek, masterfully takes it all his stride. With more twists and turns in the road, I pass some spectacular views of a panorama that takes in kilometers and kilometers of the Earth’s concave.

After reaching the conclusion of the Gotthard pass, I pull over for a break in Airolo, a nearby town with a very inviting and warm pub. I pull up a chair, order a pint and it’s not before long I find myself in a highly engaging conversation with the locals. Friendly and eager to share some of their local history, they tell me more about these pools of water in the Gotthard Pass and how they were eventually overcome, particularly over the river Reuss that sits between a direct vertical drop of two adjacent mountains. Deaths were known to occur frequently especially in the spring time when the snow was deep and still melting in the reservoirs below, whilst the paths were slippery and wet. After one particularly bad year, it was resolutely decided that a bridge was necessary. However, due to the perilous conditions of its construction, it became known as the “Devil’s Bridge”. 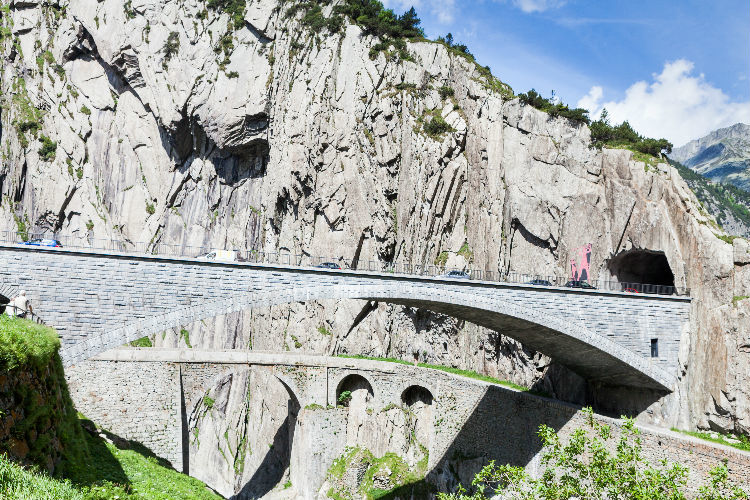 The local legends from the townsfolk flow easily and quickly, like the beer being poured from the tap into ready glass mugs. Legend has it, that the bridge over the Reuss River was so difficult to construct that a Swiss herdman summoned the powers of the devil to build the bridge. The devil appeared before the herdman and agreed to build the bridge on the condition that the first soul to cross over the bridge would be a sacrifice to himself. The herdman quickly agreed, on the day it was completed he drove a goat ahead of him, foiling the plans of this mighty adversary. The devil, angered for being taken as a fool, grabbed a boulderous rock with the intention of smashing the bridge. However, just in time, a wise old woman etched a cross onto the rock, making it impossible for the devil to lift it anymore. As all legends should, the story ends well, with local dwellers enjoying the benefit of passing over the Reuss without a fear for their mortal soul. Today, there is a modern concrete bridge that spans the expanse of the river, right over the top of the original Devil’s bridge. The boulderous rock inscribed by the old woman is said to be still there too…

My journey through the Furka and Gotthard Pass, was every bit as exhilarating as I had hoped. As I tuck in for the night at a nearby cosy B&B, I’m feeling beset with tiredness…

and yet eerily alive.