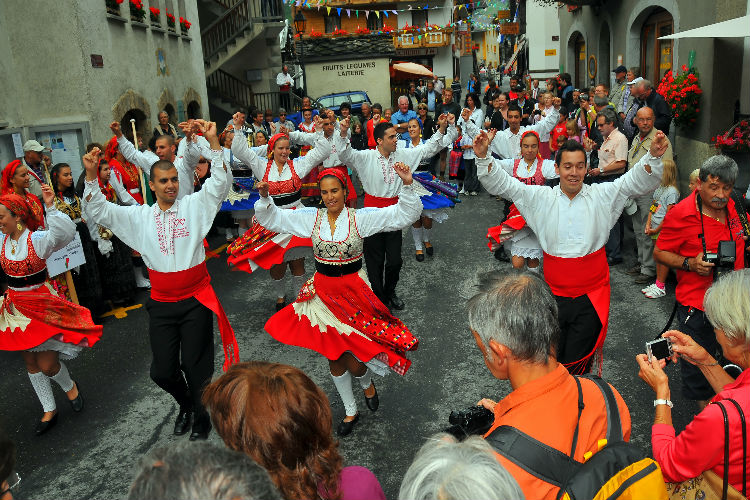 With my olive green bottle cork hat, fluorescent yellow socks and “I’m-With-Stupid-→” t-shirt all packed, I was ready to hit the road Jack. But, this time my destination was the Gauklerfest Interlaken or the Interlaken International Street Artists Festival. An event that I would strongly recommend as I had a wonderful time and I’m positively sure that you would too. Unlike most events, it was free, which is always a good highlight to begin with, but the performances were so enjoyable. Not to mention the spontaneous reaction and jolly feedback from the crowds that made this a really wonderful event. There were performances of every kind, from acrobats and comedians to jugglers, musicians, and more.

Generally, I’m a big fan of festivals and events all over Switzerland and I’ve been to many. My favourites probably include the Montreux Jazz Festival, held on the eastern shore of Lake Geneva. It’s a world famous music festival that has all types of music, wouldn’t be able to think of anything that’s not played, sung, fluted or strung. When I visited back in ‘98 there was jazz, blues, rock and pop. It was great. I saw some artists that became big names afterwards like Ella Fitzgerald, Stan Getz and Charlie Mingus.

Another great event, though perhaps this one ‘aint for everyone, was the Eidgenössisches Jodelfest, basically a yodelling festival. A four day celebration of the iconic Swiss sound that is a dramatic call to the mountains. I was mightly impressed with the pitch and depth of the talent on display. Couldn’t help but get into the spirit of things with a deep vocal yodal myself. But there’s heaps more festivals than just these, you would never know considering how straight and serious the Swiss seem most of the time. But there you go, they do like to shake loose every once in awhile.

Anyway, so where was I? Oh yes, the Gauklerfest Interlaken, I arrived in to Interlaken from Bern driving the Jeep Grand Cherokee Limited edition. A mighty robust 4WD, I wanted something hardy that would be able to cross over Switzerland’s mountainous terrain quite easily, and the Cherokee most certainly did the job. It didn’t take long to arrive, just a short hour or so. You can also get to Interlaken quite easily from Lucerne, which is another great destination to have a look around.  The Cherokee was jolly good fun to drive, so I took the chance to take spins up the mountains. The manual said that it had a 247 bhp diesel engine, which I’m pretty sure i managed to belt out. I liked the 8-speed automatic transmission it was good on the fuel economy, but it also gave a brilliant speedy acceleration and yet the gear shifts were wonderfully smooth. The 4WD system had great traction control, which I got the chance to test as the 4WD made light work over the snow, mud, and rocks that I took it through. By the time I returned it, it looked like it had been through a war zone, but I'm pretty sure it had enjoyed itself as much as I had.

I arrived at the grounds of the Gauklerfest Interlaken, in front of Brasserie 17 a bar and restaurant with a wonderful vibe of music and underground culture. The first performance that I saw did a fantastic job of breaking the ice with an act by Senmaru. It was a comedic take on a classical Japanese performance called the “Edo-Daikagura” or something that sounds like that anyway. Senmura has much of the crowd in fits of laughter as he does a ridiculous attempt to shake away an evil spirit. Not sure exactly, if the guy was successful in the end, but he had us all enthralled with traditional magic tricks.

The crowds couldn’t seem to get enough of Ernest the Magnifico from Down Under. Ernest is this rowdy and boisterous Australian character who sports a terrible moustache and attempts these ridiculous stunts with his over-powered tractor of a stunt-car and then an over-sized pogo stick. But don’t think that just because he was on show that he was talented and completed all these stunts successfully, or even most of them for that matter. The guy was bad. Though  I honestly think that must have been a great part of the appeal, as the crowd was in peals of laughter, especially the kids.

My favourite was perhaps the Duo ComicCasa that is performed by the magnanimous couple, Herman & Henriette. The couple who appear to ostensibly be a couple of cleaners, decide that they have been tasked with the overwhelming job of saving the day and then attempt to do so in an utterly haphazard manner. Before you know it, hats are flying, garbage bins are being used in rather precarious positions, spray bottles are used in ways that you never thought possible and broomsticks take on a whole new meaning. All ends well though, with a grand finale, that basically involves new found value in the household toilet plunger. I thought it was all rather entertaining, that showed what a couple of humourous minds at work can achieve.

Between shows I was able to try out the local gastronomy on offer, which all went down very well, explored a little of Interlaken and got to know some of the locals and guests arriving from locations all around the world. All in all a jolly good time was had. I think I might even attend again next year, only as a performer. Stay tuned as I launch my new career, yodelling-on-a-pogo-stick.