Art Under the Open Air 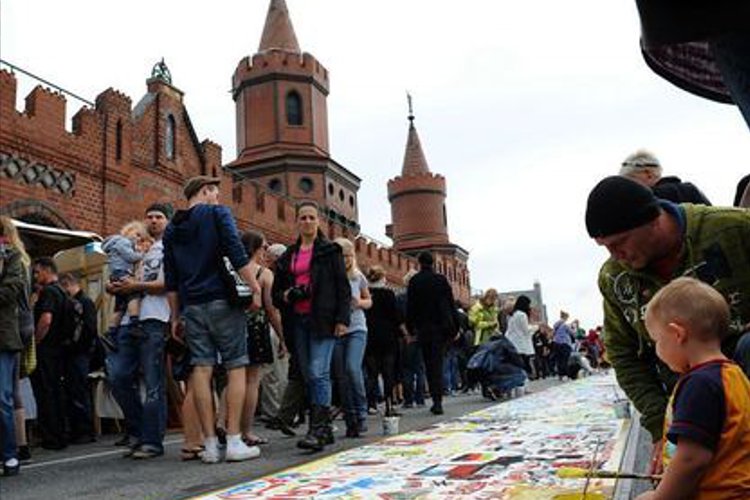 Berlin is a cultural epicenter. At its thriving heart it is impossible to pick up your daily milk and bread from the local corner shop without passing at least one opera house, a theater, museums or an art gallery. But then it seems that Berliners don’t live off mundane things like bread and milk as the rest of us do, but rather live on the finely tuned notes of a Mozart symphony, a decorated accessory of haute couture, or the discerning taste of a saffron and basil tagliatelle.

It therefore can easily become a challenge of what to do with the kids when travelling in Berlin, or for that matter anyone with an attention span of less than 15 minutes, which I think probably includes my husband. Feeling as though I better cater to the needs of my accompanying travellers, I sought out to discover an outdoors Berlin. I needed attractions that would hold their attention for longer than the usual 2 minutes before my 5 year old starts groaning painfully loudly in ear shot of the curator “THIS IS REALLY BORING, MUM!!!”. I was determined that this was going to be a trip to Berlin that we were all going to enjoy together - damn it!

That’s when I stumbled across Berlin’s Open Air Gallery were the main street of Oberbaumbrücke which crosses over the Spree is converted into an art mile. The event which seeks to attract more than a hundred artists from around the world, invites them to display their paintings, photographs and even sculptures along the strip and over the bridge, starting from Kreuzberg and concluding in Friedrichshain. The festival which occurs bi-annually on June 5th and July 3rd this year, perfectly coincided with our trip to Berlin that we took in early June.

For our day’s outing we hired the Mercedes Benz GL, which comfortably seated our entire family and along with all our stuff we set off towards the Spree. We found parking by the underground railway station U Schlesisches Tor which is conveniently located on Warschauer Straße. From there we walked towards the Oberbaumbrücke and the spectacle was really amazing. Under a softly warm and rare incandescent Berlin sun, we passed by a wide and incredibly colourful variety of artwork.

For its organisers, the highly regarded Stadtteilausschuss Kreuzberg, the aim of the Open Air Gallery to to stimulate dialogue between artists and beholders. True to its objectives the artists were present and were eager to engage in conversation with the many onlookers. One artist named Juan Espejo, who created a stunning series of Picasso inspired faces, told us that he has been involved in the event every year since it premiered in 2002. He felt that even though it has grown in popularity over the years, it has still remained true to its original concept. Another artist, Sven Swora took the time to explain the inspiration behind his pieces, many of which beautifully depicted the city of Berlin across its landscapes and inner city hubs. Another young and highly evocative artist was Olivia Pils, who explained to us how she used her creativity to express her perception of our post modern reality. From first glance of what appeared to me as just a series of pretty pictures, I have to admit, I was rather blown away!

Undoubtedly the highlight for the kids was the 120 meter long canvas sheet that is laid down on the ground and everyone, young and old, is invited to “paint, draw or doodle”.Well my kids got into it straight away with big sloshes of bright colours everywhere. Inspired, I got into some of the creative action too and doodled a little design for which I was quite proud. Of course however, I will leave that ultimate appraisal to Berlin’s many local art beholders.