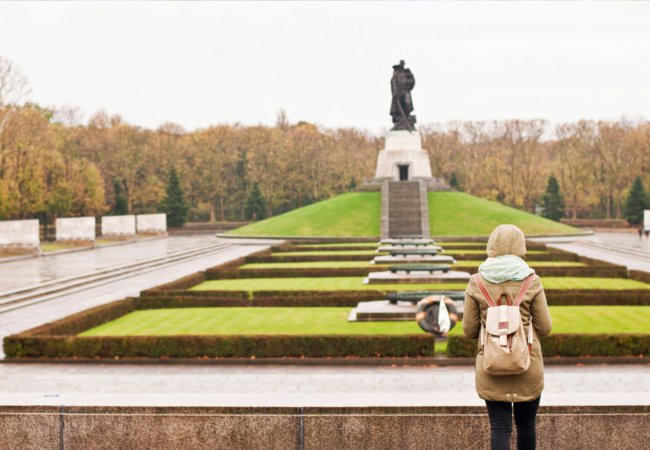 Berlin has risen out of the ashes of a divided city. At first as a grungy city that was “poor but provocative” it was filled with rakish charms and artistic energy. Yet more recently it has emerged again to become a city with sophisticated cool. Berlin still throws its wild techno parties in bombed out factory sheds as if Mom and Dad left town after the Berlin Wall came down and then never came home. But at the same time, Berlin has searched deep down within itself, developing its character to something that is new, fascinating and undeniably charismatic.

Under a bright Berlin sun and through streets pulsating with energy, hire a convertible to explore some of the most intriguing sites that vociferous, grown up and at-often-times eccentric Berlin has to show.

As if following a tribal route, many Berliners make their way to Prenzlauerberg’s Mauerpark every Sunday afternoon to either perform or be part of the audience of the Bearpit Karoke. The none too inconspicuous location was formerly the “death strip” between the East and West. Today it houses food stalls, a flee market and an amphitheater, where all the festivities take place come 3pm.  A charismatic Irish chap pedals in with his mobile sound system and shortly declares the opening of Bearpit Karaoke. In front of a raucous and vociferous crowd anyone who can sing, or rather anyone who is prepared to sing, is welcomed to take center stage to beat out their tunes. The gladiatorial atmosphere of the crowd will either adore you if you’re any good or utterly humiliate you if you ain’t.

Remember learning about the Berlin Airlift that took place between 1948-1949? Well if not you can catch up on that class of history here. Tempelhofer Park was the former airport that was used in the dangerous project that saved the lives of thousands of Berliners. Still largely intact with an air traffic control tower and a Hermann Göring erected terminal building there are even a few planes forever about to just take off by the departure gates. Visitors today can jostle for space along the air strip with their skateboards or rollerblades, gatecrash a football match or a game of softball. Absolutely ideal for bringing a picnic lunch, you may want to bring a beach umbrella too because there is absolutely no shade.

One of the conditions for German reunification was that all memorial sites that were dedicated to the fall of Soviet soldiers would be kept and maintained by the new German government. One of these sites is the utterly jaw dropping shrine found in Treptower Park. Designed by the Soviet architect Yakov Belopolsky the site commemorates the 80,000 fallen with a 12 meter high statue of a Red Army soldier with a sword, holding a German child with his foot stamped over a ruined swastika. Striking - most certainly, tactful - we’re not so sure.

Ok so this one is not really related in anyway to Berlin’s tumultuous past, but if you’re travelling to Berlin there is no way that you could rightfully skip over MountMitte. An aerial adventure garden, take a ride in dangling Trabant cars or flying canoes. Brace yourself for a 13 meter sky fall which is bound to be a definite winner for all self-acknowledged adrenalin junkies. All visitors are expected to don a climbing harness which are attached to a vertiginous rope course, guaranteeing that gravity won’t be bringing anyone down.

Whether you choose to hire a Porsche 911 Cabrio or the BMW Z4 Roadster, any of these locations will give you a great feel for the authentic character of Berlin.