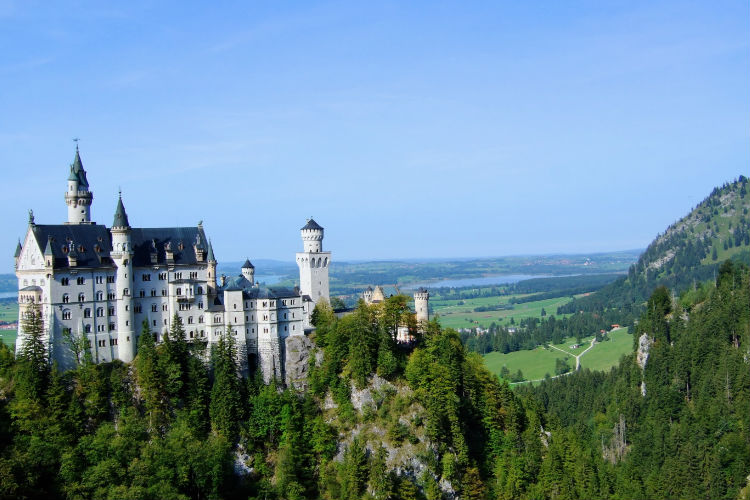 So you know those rare slices in life, where a long weekend is coming up, and nothing out of your control has seized up behind you to demand that spare time? Well, that’s exactly the wonderful prospect that me and my lovely boyfriend faced. But to make things even better, spring had sprung, sunshine was pouring, flowers were blossoming and the world beyond was beckoning for us to join it. Thus being the mere mortals that we are, who were we to deny the summons? Our meeting point with mother nature we agreed would be in Germany, in a drive along the scenic Romantic Road. The perfect chance to nurture a budding romance with history, nature and old world charm… and yes the boyfriend was to tag along for the ride too.

Our journey along the Romantic road was to start in Fussen and weave our way up northward through the beautiful Bavarian countryside for over 400 km. The trail took us through entirely charming and quaint old world towns and villages filled with half timbered houses and flower potted cobblestone alley ways. There were amazing imagination-inspiring castles, hidden monasteries and a picturesque countryside filled with vineyards, flowing rivers and rolling green hills. With these sorts of surroundings it was hard to resist not feeling slightly romantic. There’s a warning caveat on this trip though, it may make you fall in love a little more heavily than, ahh... originally planned.

Our plane arrived at Munich and from there we hired the ridiculously suave and charming Bentley Continental GT Convertible. I think we both developed quite the crush on this sensational GT as it unceasingly pulled all the right moves (no pun intended). Designed with a twin-turbo 4.0L V8 engine, this car drove with an unbidden passion to consume the road that tirelessly lay ahead. While my boyfriend seemed captivated by the power performance of the Continental, I was equally besotted with the GT’s luxurious design. The interior was highly comfortable with cobra’ style seats and all-leather soft-touch surfaces, comprised within the external wrapping of a convertible supercar with a sweeping bodyline and a muscular physique.

From Munich we hit the road in fantastic spirits as we started our trail in Fussen with its nearby disneyland doppelganger Neuschwanstein castle. Truly, as you approach this castle it gradually appears out of the Bavarian forests as a magical disneyland palace look-alike, all with the characteristic white walls, towers and elongated spires. And quite appropriately it is infact referred to as the Fairytale castle. Whilst we were somewhat sorry to discover that the castle is neither very old (having been constructed in 1869), nor the former home of ancestral royalty. We discovered the castle was actually commissioned by Ludwig II of Bavaria as a holiday retreat, however he never got the chance to spend a night within its fortified towers either as he died quite tragically just before its completion. Still we did our best to put aside these rather morose details and enjoyed the castle for what it was.

On our way we made sure to pass through Pfaffenwinkel which is known in the German as the “Pastor’s corner”, as it is filled with many churches. Some grand, many simple, they all provided a plentiful rich array of historical architectural styles.

From there we travelled to Augsburg and enjoyed a thoroughly engaging encounter with a world from over 2000 years ago. This city had a great historical legacy as one of Germany’s oldest cities. Augsburg was founded by the Romans where many of the original relics are still visible. In fact within its historical old town, a long gone world comes to life amidst the baroque town houses and decorated boulevards. By the time we arrived in Augsburg we had worked up a strong appetite and decided to have dinner at a restaurant located in an old vaulted tower. Highly romantic we were seated at a candlelit table for two and enjoyed a scrumptious medieval cuisine. I dare say with all this romantic ambience in the air, my darling beau played the part of a highly chivalrous knight in shining armour!

The next morning we headed out driving under a stream of sunshine through rolling emerald green hills and besides Viridian blue river beds. I swear it is the perfect recipe to get intoxicated on life! As the sun was setting over the hills of Bavaria we arrived at Dinkelsbühl, an old town that until today boasts 16 fortified towers, several authentic city gates, and an original ring wall. A night tour of the historic town was recommended to us, so with the night watchman as our guide we took a tour of the town. While it was a tad spooky it was also exceptionally captivating as the night watchman gave us a fascinating glimpse into Dinkelsbühl’s history and many legendary folk tales. We spent the night at the classical hotel "Hetzelhof" where we finally lay our weary heads to rest upon the four pillared bed that was encased in silk drapes.

After tucking into the gastronomic delight that was breakfast at the hotel, we were back in the Bentley with the hood down and brushing our way through the crisp spring air. Our destination that day was Rothenburg ob der Tauber which is said to be the best well preserved medieval town in Germany. Indeed I have to admit it felt like we were surrounded 360 degrees by a picture perfect postcard from Germany, with the city’s medieval walls that encircles the old town center and bavaria’s beautiful lush green forests just beyond. We stopped to have a lunch time meal at a cosy restaurant that offered a delicious traditional bavarian fare.

Our wonderful journey of the romantic road finally came to an end at Wurzburg, which is  located in the heart of the famous Franken wine region. We drove for kilometers passed beautiful aromatic vineyards and quickly made up our minds to stop here for the supposed purpose of a quick nip to try the locally produced wines on offer. Yet, not surprisingly that quick nip, turned into a 3 course affair at one of the gourmet restaurants. The wines were delicious, and I can say that now with much authority as we tried a wide selection of white wine served in the iconic round bocksbeutel, a Pinot Noir, a Chardonnay and then a Moscato.

The next day we wrapped things up as we returned the dear old Bentley Continental in Frankfurt and took our flights back home. But now that we’ve been smitten by Bavaria’s love bug, we have plans to remain infected.