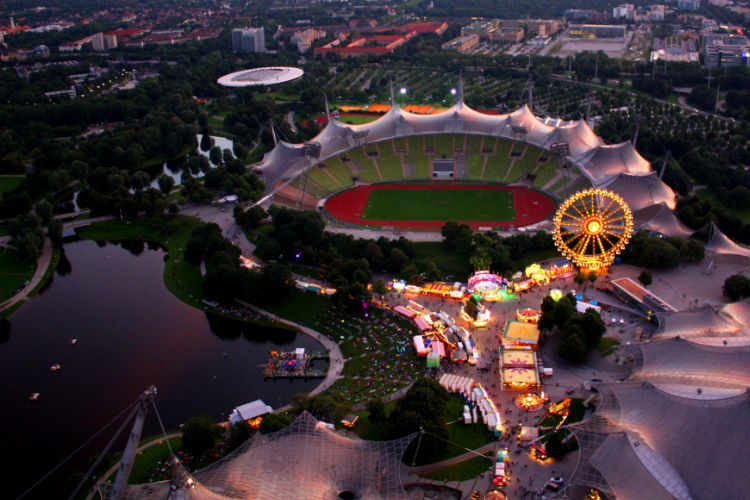 With the kids off from school all summer, we took every opportunity we got to travel around to see new places. We spent two incredible weeks in Italy in June and then spent almost the whole month of July traveling around South America. I had figured we would spend August at home, getting ready to go back to school, buying school supplies and just relaxing at home. We had been home a week after arriving from South America when hubby got a business meeting he had been trying to scheduled for months, confirmed. He had to travel to Munich for two or three days, or… we could all go, he would have his meeting one day and we could all spend a few extra days together in Munich. Out came the iPad and I googled ‘What’s going on in Munich in August’. A lot, it turns out. Munich holds a bunch of music festivals and carnivals around the city and summer is a great time to have fun in Munich, and so the heck with buying school supplies before the crowds flock to the stores. We are going to Munich. School supplies can be ordered from Amazon.

We arrived in Munich and were greeted at the terminal by our rent-a-car company. They offer this ‘meet and greet’ service that was truly convenient. As opposed to having to take the shuttle to the rental desk with all our luggage in tow, they delivered us the keys to our BMW X5 SUV, helped us load our luggage and we were on our way to the hotel. We arrived at the Hotel Königshof, a gorgeous hotel located right on the Karlsplatz/Stachus square, walking distance to the Marienplatz ,the Viktualienmarkt, the National Theater and Maximilianstrasse, the museum quarter, the Fünf Höfe and the shopping mall in Neuhauser Strasse. It was the early afternoon and the sun was out, so we decided to go for a walk. We strolled through the Old Botanic Garden and wandered around the neighborhood past the Deutsches Theater, the Asam’s Church and then walked up north aimlessly and crossed through the English Garden. Right there, in the middle of the park, we found a beautiful lakeside beer garden, the Seehaus im Englischen Garten. We sat down for beers (sodas for the kids) and shared a sampler plate of aromatic-piquant cheese, pretzels and sausages as we talked about our plans for the next few days.

Up bright and early the next day (jet lagged and all), hubby left for his meeting and I took the kids to the Olympic Park for the ultimate summer festival, the Impark Summer Festival, or Sommerfestival as the locals call it. Over 100 carnival booths and amusement park rides are set up around the park. We rode the Willenborg Ferris wheel, got on the bumper cars, munched (snacked?) on cotton candy and had some old-fashioned fun. There was an incredible Animatronics dinosaur exhibition that Mark described as “sooo cool” and a Speed Carving showcase, in which wood artists carved a series of figurines using chainsaws. We spent hours on the rides and then bought food at the Gourmet Alley, a food-court type set-up within the fair, and sat down on the man-made sand beach along the Olympiasee Lake to watch the Wake Masters wakeboarding competition.

We made it to the hotel around 4pm and hubby had just made it back as well. Perfect timing for a little down time and get ready for dinner. The Mark’s restaurant had been highly recommended, so the concierge at the hotel was kind to book us a table for dinner. Our Mark was extremely excited to go to a restaurant that boasted his name and well, Olivia, she is up for anything that involves wearing a dress, so she was totally eager. The Mark's is located at the Mandarin Oriental Hotel and it serves French cuisine with an Asian flair. I had the lobster with coriander sauce, which was absolutely decadent and hubby’s filet of beef with a ragout of artichokes and potatoes was outstanding. The kids devoured a fresh fish from Brittany. The service was impeccable.

The following day we set out towards Eisbach. If you ask me, this oughta be one of the coolest places in Munich. Right in the middle of a city park, surfers take on the river waves in a spectacle worth watching. We asked the concierge to help us get a picnic basket prepared. He really went all out and had all kinds of Bavarian delicacies packed together with two bottles of beer from a local brewery and a blanket. We got to the park, sat on the river bank and spent the afternoon watching the surfers do their thing, running around in the park and just lying on the grass as the kids played.

Munich turned out to be the perfect end to a perfect summer. Oh, and hubby’s meeting went well too, so we might be back sooner than we think (fingers crossed).