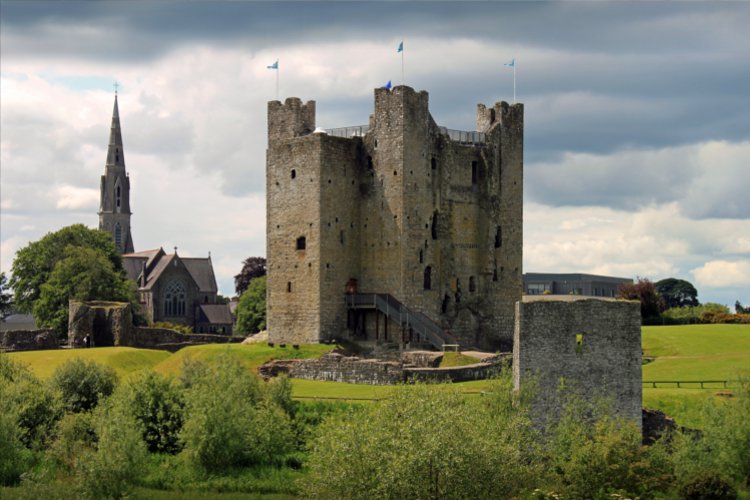 Dublin is a fantastic city to visit with a rich, if not dark and dramatic history. A riveting culture that will see you laughing through the night at any one of its bars and pubs and of course the excellent quality guinness that fuels it all. Still, much of Ireland’s magic is to be found on Dublin's outskirts, from ancient castles, to haunted overgrown graveyards and little villages that have managed to retain their romantic charm. We strongly recommend hiring a luxury car to take short day trips out of Dublin, be it an Aston Martin DB9 or a Ferrari 458. In either of these superb vehicles trace a star around the city of Dublin as you go out to see the sights by day and then come back to the charismatic vibe of Dublin by night.

There are two reasons to go to Glendalough, the journey and the destination. Getting there takes about an hour from the center of Dublin taking the scenic route through Sally Gap. As the terrain is relatively bare and vast, at some parts you can see for kilometers on end, but it’s the emptiness that leaves all the room to think. By the time you arrive at Glendalough, you will be more than ready to stretch your legs in a hike that leads you through the forest trails. An easy trail is available for those who would prefer a more relaxed stroll on a paved walkway by the lake. While a far more tenacious hiking track that climbs through the thick of the forest is there for those wishing for greater adventure.

To Dublin’s north is the 5,200 year old burial ground of Newgrange, a UNESCO World Heritage site, it is believed to be older than both Stonehenge and the pyramids of Egypt. The complex circular structure is about 85 meters in diameter and 13 meters in height. A central passage that leads into a chamber with 3 alcoves is aligned with the rising sun of the winter solstice, so that on this rare occasion a beam of sunlight enters and illuminates the entire interior chamber. An impressive feat for stone age architects, don’t you think? The structure which had until recently  believed to had been a tomb, is now understood to have more religious and spiritual significance than that, as an ancient temple of worship where leaders were laid to rest. Each year a lottery is available for a select few winners to view the cold weather solstice where remotest history and astrology magically intertwine.

No journey to Dublin is complete without a visit to a ruined ancient castle. The little township of Trim fits the bill perfectly as it is just an hour’s drive from Dublin and home to a majestically weary worn castle. The Trim castle has all the effect of igniting the imagination as to the stories it could tell, with its elongated keep and fortified walls. Built in the late 12th century an astounding amount of its original structure is still intact making it a unique prized historical gem. With features including a 14th century towered fore, a three aisled great hall, a gatehouse and fortifications, it was the selected location of where Mel Gibson rampaged against his neighboring enemies in Braveheart.

As Dublin sits on Ireland’s eastern coast, you may possibly have thought how do you travel to the east of Dublin? Well the answer to that Howth (pronounced with a strong ‘o’), is situated on a peninsula that stretches further out into Dublin Bay.  Howth is a charming fishing village, and certainly worth a visit more so than just because it is on Dublin’s east.  A slow paced and calming town take your time wandering through the quaint shops that line the central strip and the fresh farmer’s market. Back on the road, follow along the sea until you arrive at the start of the hiking trail. This trail wraps around the perimeter of the peninsula and finishes off with a grand atmosphere of where the deep blue seas crash against the cliff side spraying water into a ferocious wind. On your return back into town, satisfy that voracious appetite with the height of local cuisine - a newspaper wrapped meal of fish and chips. Greasy and exceptionally tasty the fresh battered cod and chips are salted and vinegared all for a stunning effect. Before you leave head out to the park and sit down to watch the boats come in to dock as the sun continues to slip behind the horizon.

With so many great locations to check out, a luxury car rental in Dublin becomes the necessary companion. As the summer approaches make an online booking to start tracing your star around Dublin’s fringes.