From Summer to Winter: Best Festivals in Paris 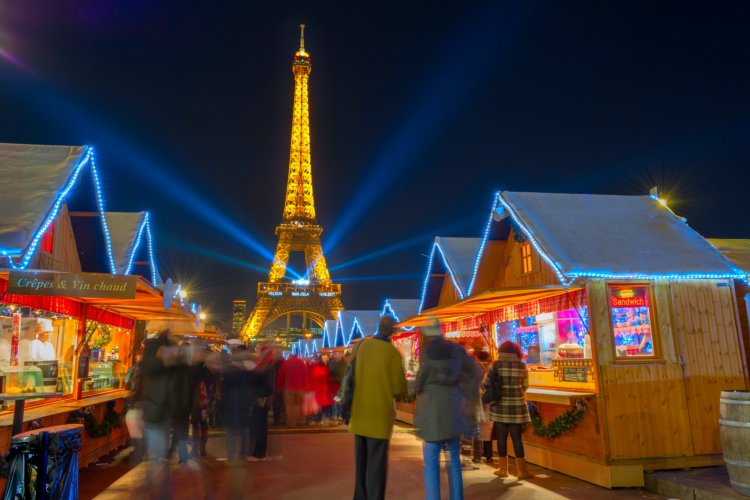 Perhaps in respect of its monicker the ‘City of Lights’ never seems to sleep. Paris loves to party, no I don’t mean Hilton, although she clearly does too, but the people who call this city of cabarets, piano bars and martini’s home. Effectively keeping the energy pumping year long, are the many festivals that the city hosts. From summer concerts to winter markets, here is your list of the best festivals to be found in Paris, every season of the year.

Taking place every year on the night of the summer solstice, the whole city becomes the party venue, as hundreds of thousands flock to the center to enjoy the music, mayhem and zesty hedonism on offer. For anyone who may happen to be interested in good music, good grog and then hitting the dance floor with a beautiful blond, well this may happen to be just the event for you.

Love your jazz music and love it even more live? Well book your tickets to arrive at the Paris Jazz Festival where the talent is a captivating mix of fresh and well established. The event is held in the beautiful and leafy surrounds of Parc Floral, located in the Bois de Vincennes. The entrance fee is the 5 euro you pay to park your car by the grounds. The music starts to play early afternoon and keeps going well after the midnight owls have started to croon. So bring a picnic rug, and a bottle of red to go with those cheese and crackers, and bring on the blues!

Of course the summer time is also the season for Bastille Day, the Tour de France and a whole retinue of music festivals such as Rock en Seine and Cinéma en Plein Air, just to name our favourites. So arrive in Paris during the summer and you will quickly find yourself with a lot going on.

As the leaves turn a rusty orange and golden hue, Paris appears adorned in an additional splendor, that does not go unnoticed by the locals. Join in the celebration of natural beauty by attending this festival that over the years has come to combine the international music fusion of  Les Semaines Musicales Internationales with the International Dance Festival. The shows, art exhibitions, theater plays and productions are to be enjoyed throughout September to December in parks and outdoor amphitheaters throughout Paris.

A fact seemingly lesser known about Paris, is that come November, Parisian go crazy for tango as part of the city-wide Tango festival. At venues across the city you will see swaths of burgundy velvet, maroon velours and deep blood-red silks as people gather together to dance, laugh and learn more about this most romantic Latin dance. In the past over 250 performers from as many as 20 different countries have descended on Paris, to strut their stuff, tango style. Spreading out across the city’s many stages and on street performances, they bestowe on Paris a very infectious and exotic rhythm. Whether you are newbie or profesh, there are dance classes at all levels, ensuring that everyone feels welcome to attend.

The warm golden glow of Christmas markets is free to be enjoyed at numerous locations around Paris during the month of December. The custom which was initially liked and thereafter pinched from their German neighbours some several centuries ago has become widespread across France. Starting at the German and French border of Alsace and gradually moving further west, as the French quite liked the opportunity of cradling a mug of warm mulled wine while picking up an extra Christmas present and a stocking or two. The Best Christmas markets are to be found on the Champs-Elysées (which is the largest in the city), Trocadero (which also rather wonderfully features an ice-skating rink), La Défense, place Saint-Sulpice and Montparnasse (a favourite for its meats, cheese, cakes and wine).

While it does indeed seem strange that one of Paris’ best festivals is not even French, it seems that Parisians are not fussy when it comes to finding a good excuse to party. Be the excuse German or Spanish, I guess why not also Irish?  Thus come the 17th of March Paris comes alive in streams of green, with parades being held on prominent streets. Parisians and expats alike can be found revelling in a cheer presumably fuelled by copious amounts of Guinness. Though as festivities vary from year to year, it may be wise to check in by googling “Paris St Christopher’s” to see what thrills are in store for you this year.

In a fantastic initiative to bring culture to the people, the French Department of Culture in 2005 initiated an event where almost every museum in Paris freely opens their doors to the public, between the hours of 7pm to 1am, just for the one solitary spring night of the year. The event, not surprisingly, was a wild success and has been held every year thereafter, effectively expanding the public’s exposure and appreciation of art and culture. So whether your interest lies in the galaxies beyond, the history that lies beneath our feet or what future technology may bring, you are in luck. Several hundred museums in Paris will open their doors to show off their exhibitions, host debates, art lectures, and conferences - all for free!

With this list of year wide festivals, I think it is safe to say that it is always a good time of year to travel to Paris. Yet for the chance to do and see as much as you possibly can hire the Lamborghini in Paris and do it all whilst looking absolutely sensational. After all, life is always best lived in the fast lane!