Beer Me Up, Scotty! 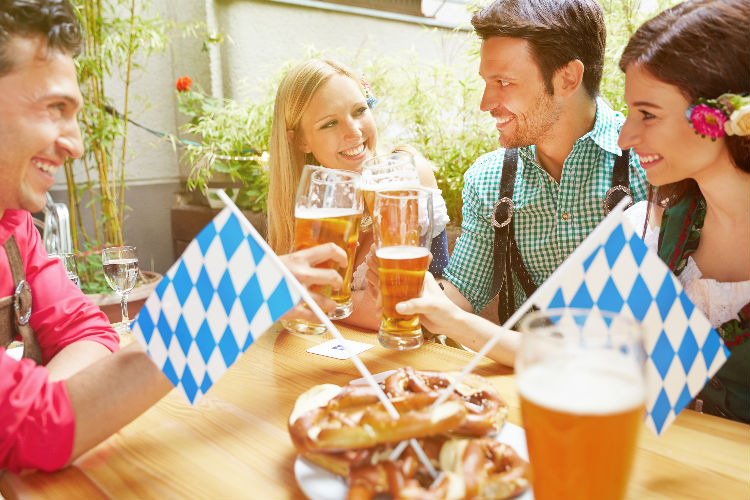 Beer is as important to the region of Bavaria as fashion is to Paris or perhaps Ferraris are to Italy, it is an aspect that is ingrained into the fabric of their local character. This might explain why Germans in Bavaria have a reputation of being the friendliest. They embody the truism that beer, like life, is best served chilled.

Whilst I do personally consider myself to be more of a scotch and whisky man, I’m certainly not shy of sharing a draught or two amongst good friends. Thus when a good friend of mine suggested that we take a beer tour of Munich together, I couldn’t really resist. Afterall, beer really is not the answer. Beer is the question. The answer is …..Yes.

Once we arrived in Munich together we decided to share the cost and split the drive of an Aston Martin Vanquish rental. It was an excellent choice as this car was pure exhilaration on wheels. Constructed with Aston Martin’s supposedly most powerful production engine ever built, the AM29 V12, our Vanquish was supposedly capable of rocketing to 100 km/h in 3.6 seconds. Not that we actually put that figure to the test, we were quite satisfied taking the customer representative’s world for it. Still, with a gentleman's weekend on the cards, it’s comforting to know that should we be in need of a quick getaway, we will be able to do so with satisfying speed and the right amount of dapper style.

We started our beer tour in Augustiner Bräustuben, which had all the charm and spirit of a local Bavarian tavern, without the malodorous elements one might expect. As you enter you are really struck with the distinctly similar experience of walking into a grand cathedral, only in this house of worship you are praising thanks to the lord of the hops.The beer hall is large and cavernous and envelopes you in a similar awe inspiring fashion, yet instead of seats being lined out in pews there were tables and chairs set out across the full length of the hall with enough room to seat hundreds. It was the religious worship as it was meant to be, with parishioners passing funds into the collection plate to drink from the oversized cup (actually an enormous stein) of salvation. The atmosphere was great, not quite the most intimate gathering I’ve been too, but there was lots of laughter and conversation to be shared everywhere. The booze was obviously top notch and the food wasn’t bad either.

Next stop was Waldwirtschaft, otherwise best known as WA-WI, which is a generous local concession for a name I can hardly pronounce sober. This was an absolutely enjoyable, highly recommendable, quite possibly the best beer garden in Munich. A cosy little place, it is located within the southern suburbs of Munich. Perhaps what I loved most was the sign on the entrance that read “Roses are red, Violets are Blue, Poems are Hard… BEER”, a classic rendering in the style of the other great Homer, that is Homer Simpson.  As we were there in the summer time, there was a great atmosphere on the outdoor jacuzzi. A live jazz band was playing, traditional bavarian food was on offer and the beer tap was flowing. Wa-Wi’s specialty is the home made Obatzda which is a Bavarian cheese delicacy that was served with other hot treats fresh off the grill.

After that, was the Hofbräuhaus, almost a beer institution in Munich, as it is the most prominent in the city and is said to have shaped Munich’s beer culture. All in all it was a very traditional affair in the grand baroque building on the corner of Orlando Am Plarzl and Munz Brauhaus and with the classic Hofbräuhaus heritage in the atmosphere the beers too were of a timeless excellence. In 1766, when Benjamin Franklin made a visit to Germany he actually paid a visit to this very same beer hall. Legend has it that amongst the intimate group of acquaintances with whom he was sitting he surmised that “In wine there is wisdom, in beer there is freedom and in water there is bacteria”. While I perhaps would add that in whiskey there is life, I feel on the most part he is quite spot on, the old dog.

Last, but far from least was our final visit to Seehaus, situated on the elegant surroundings on the shore of a lake in the Englischer Garten, it attracts all the most glamorous among the glitterati.   We took our drinks outdoors on the pavilion and by that late stage of the night, or rather early morning, we were enjoying a couple of the locally brewed beers whilst watching the colours of sunrise reflected on the lake. The views indeed were beautiful both on the lake and in the hall as there were a fit selection of hotties floating through the halled archways. As we were checking out the fine human specimens we noticed a few of Munich’s favourite celebs were there, such as the strapping Xabi Alonso and Manuel Neuer, not to mention a heap more of wanna-be celebs. You see, ultimately the great thing about beer, is that it makes you see double and feel outrageously single!