A Business Deal and a Great Meal 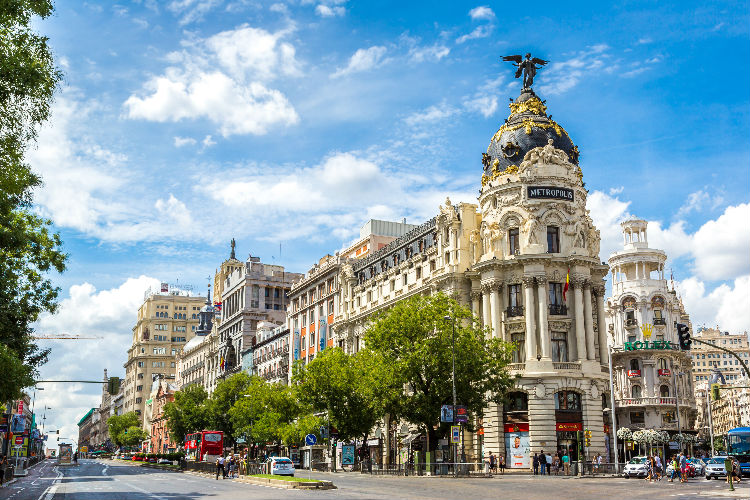 I’ve been wanting to write a post about doing business in Spain for a while. Spain is a wonderful country for business travel. It has incredible opportunities for foreign investors and the Spanish are extremely welcoming and accomodating. I just got back from Madrid, where I had an important meeting with a potential distributor and I must say, I was extremely pleased with the way Madrid treats its visitors.

I arrived at Madrid Barajas Airport and was greeted at the terminal by the rent a car company. Their meet and greet service personnel delivered me the keys to a Rolls Royce Phantom Drophead and I was promptly on my way to The Westin Palace. My meeting was scheduled for the following morning, so I had the rest of the day to do a little sightseeing and get on Spanish time. I went up to my suite to freshen up and went out for a walk.The Westin Palace has an unparalleled location.  The Prado Museum, the Thyssen-Bornemisza and the Reina Sofia Art Center are all within walking distance. I had been to all three museums in previous visits to Madrid, but the Prado had in display and for a limited time, 10 Picassos on loan from the Kunstmuseum Basel and I am big admirer, so that was my first stop. Leaving the Museum, I set out on foot to the Royal Palace and wandered around the Plaza Mayor before returning to the hotel.

A dear friend of mine from school is currently residing in Madrid, so we made plans to meet up for dinner that night. My friend knows I’m passionate about food and made a reservation at La Terraza del Casino, insisting I would love it. I knew very little about the restaurant, except it had rave reviews by Conde Nast, held two Michelin stars and that Ferran Adrià, the most influential chef in Spain was a gastronomic consultant.  We walked into the restaurant, welcomed by a sophisticated modern interior and a sleek-dressed young woman who gathered our jackets (the restaurant has a strict jacket and tie policy) and pointed us to our table. We opted for the set menu, a twenty-three-course, innovative and experimental menu that was truly impressive. Some of the highlights of the meal were the Kellogg’s paella (a dish of Rice Krispies, shrimp heads and vanilla-flavored mashed potatoes), a razor-clam nigiri with black and white sesame, the little bundles of squid bathed in onion confit,  langoustine wrapped in quinoa in a garlic-honey sauce, a tapas-sized Wagyu steak that was insanely tender, marinated in teriyaki sauce and accompanied by a green foam that I could not make out what it was made out of, and the pigeon with gelee-cru de manzana al Casis. For dessert, there were three separate dishes. My favorite, the bonbon of chocolate, ice cream and nuts.  One day I need to make my way to Adrià’s main restaurant, El Bulli to experience first hand what all the fuss on molecular gastronomy is about.

After such a sumptuous meal, the “Heavenly bed” at the Westin could not have been more heavenly.

I woke up early the next morning to squeeze in a work out at the hotel gym before my meeting. I arrived at the Metropolis building promptly at 9am for my meeting. The Metropolis building is an impeccably preserved office building and a Beaux-Arts masterpiece. As I stood in front of its facade I hoped my meeting would impress me just as much. We had an incredibly productive meeting and to celebrate, my now new business distributor suggested lunch. He had his secretary make a call and we were booked for lunch at the very exclusive private dining room at Sergi Arola Gastro. With a direct view of the kitchen and an exclusive insight into the workings of the restaurant, we enjoyed a first course of Smoked tails of king prawn in a red curry, salicornia, Kafir lime soup and Naga Jolokia, a main dish of turbot loin, cooked in mustard leave, coconut chutney and homemade "Valencia" orange curry served with mint sprouts and for dessert, a Sacher torten, a cocoa ice-cream in apricot strudel and butter.

With a productive business deal in my briefcase and a satisfied appetite, I set out to the hotel for check-out and to the airport to catch my flight back home.